After hearing no objections from the Board, we’re exploring the feasibility of starting a “Fresh Start Bags” program here in Oklahoma. Once we have all the facts we will be presenting this project to the board for approval at our next meeting. 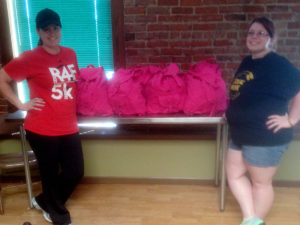 For those of you who are not familiar with the Fresh Start Bag program, the program is fairly simple, lots of work, and straight forward. The program provides youthful backpacks or duffle bags to those young victims of trafficking. I like using pink backpacks when possible. Within these backpacks is tucked many physical items the young ladies would need for a fresh start. When the final items is tucked away in the backpack we like to think we tuck a little love and compassion as well.

As I was once a Lieutenant at an Oklahoma State Police agency within the Department of Human Services (DHS), I know how vast and encumbered this department is. I dreaded the fact I had to engage them in a marathon phone call and phone tag event. Compounding this is the current budget cutting in Oklahoma in an effort to balance the budget. There is a one billion short fall. Since DHS is a big chunk of the State budget it is losing staff which adds to the chaos. Even the shelter for abused children was closed.

This is why I feel so passionate. While assigned as a United Nations police officer in Kosovo Yugoslavia from 200 thru 2003, I made the first trafficking arrest in 2001 ever in UN history. We were forbidden by the UN to investigate or make arrests in the trafficking or slavery business. This was made very clear to all UN police but especially to the American officers. But those who know me, knows that old dog don’t hunt. On investigating a report of kidnapping I found a 13 year old girl being held against her will and abused for sex for hire. I arrested the bar owner and charged him with human trafficking. Luckily we had just received International judges and even better the judge for this jurisdiction was a woman. He plead guilty and received eight years which was the maximum in Kosovo. I learned then, trafficking in Europe and most countries of the world is common. Later after serving in Iraq as an International Police Adviser to the Iraq and Kurdish Police I learned even more about this cancer which flourishes in the Middle East.

Getting back on track with this project. We as the board of 401-Kids Inc. will move forward with this project despite the governmental bureaucracy compounded by cuts in social service positions. When I am armed with the knowledge I am striving to acquired, I will post an update. You will easily recognize as it will be titled “Fresh Start Bag Project Update”. For those of you who follow us here, I thank you. If you would like to help us in our quest, suggest to your Facebook friends to like us.